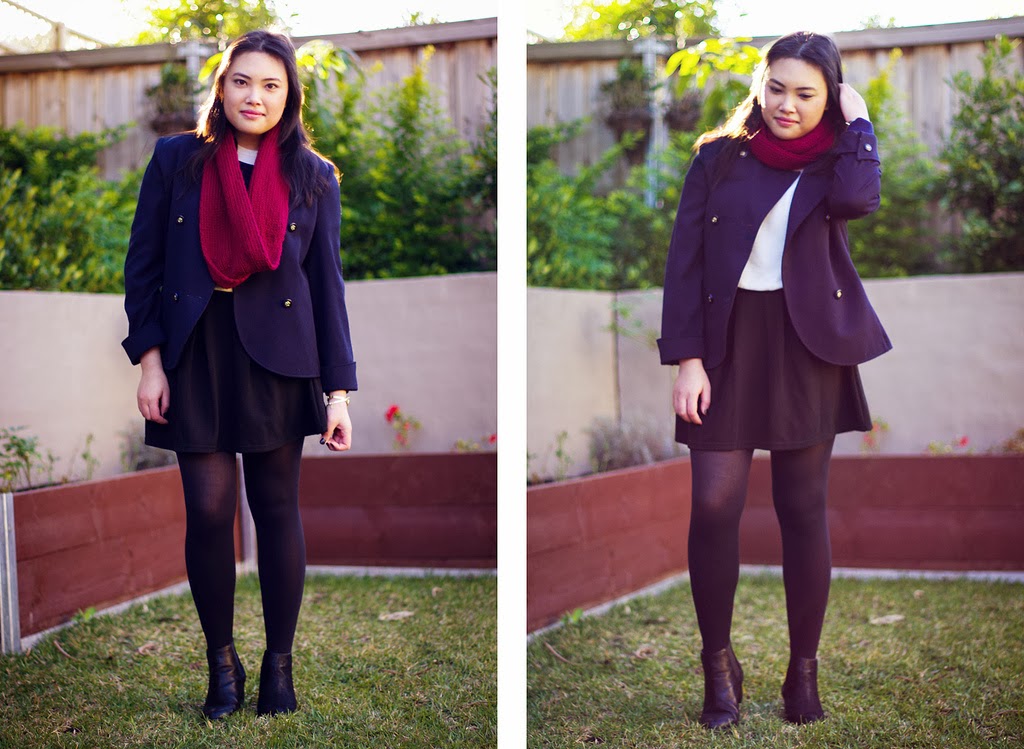 DIY snood, thrifted jacket, Uniqlo jumper, Miss Shop skirt and boots, Lovisa bracelet
Judging from my recent posts, you’d be forgiven for thinking that I wear skirts, boots and stockings on a permanent basis. After all, that’s a pretty accurate summary of what my daily uniform is like at the moment! I think it’s because I hate trying on pants in stores and never end up buying them, but after a freezing night in the city I may consider getting clothes that actually keep me warm when I’m out and about. Anyway, with winter well underway in Australia I’m proud to say that I’ve finished a knitting project for the first time in my life! If I’m perfectly honest though, I have a love-hate relationship with this snood, and not just because I was inspired by DIY goddess Shini of Park and Cube. While the stitching is pretty good for a first timer (if I do say so myself) I find the length a bit awkward, and in hindsight I should have made the scarf thinner to compensate for that. Now the snood looks strange if it hangs around my neck, but it’s also kind of uncomfortable when looped again over my head. Tell me though, which way of wearing it do you guys prefer?

Moving on, I feel like a broken record for talking about Sydney Madang, but it was pretty much inevitable that I’d end up there again sooner or later (not that I’m complaining). On my aforementioned trip I met up with classmates for a little reunion, and the food was as great as I remembered. However, the difference was that I got to try more dishes, and also had a team of fellow diners to help me do so! The chili dishes in particular were incredibly warm and hearty, and probably tasted even better due to a combination of hunger and the nippy weather in Sydney. Even though I’m weak when it comes to spicy food and couldn’t feel my tongue by the end of it, everything was just so darn satisfying. Ironically, we also went to have frozen yoghurt for dessert afterwards, but what can I say? Whether it’s winter or not, you can’t keep me from my frozen desserts… In fact, I happen to prefer ice-cream in the colder months, strange as it may seem! In summer it just melts instantly and gets all over your fingers, so that’s a scenario I’d rather avoid.

To finish the night off my friend and I visited the ice-skating rink that’s opened in World Square, of all places! They had these amusing penguins for learners to hold on to, and I seriously thought they did more harm than good for my balance. Anyway, that was my night in a nutshell. I feel like I always unintentionally talk about the weather on here, but it’s one of those things that are easy to make small talk about. Besides, even though I complain about the cold a lot I secretly want to experience waking up to snow on my doorstep one day, though I probably wouldn’t be able to handle it… I think for now I’ll keep living in blissful ignorance of a winter where the temperature actually goes below zero. Anyway, I hope you’re having a great day!