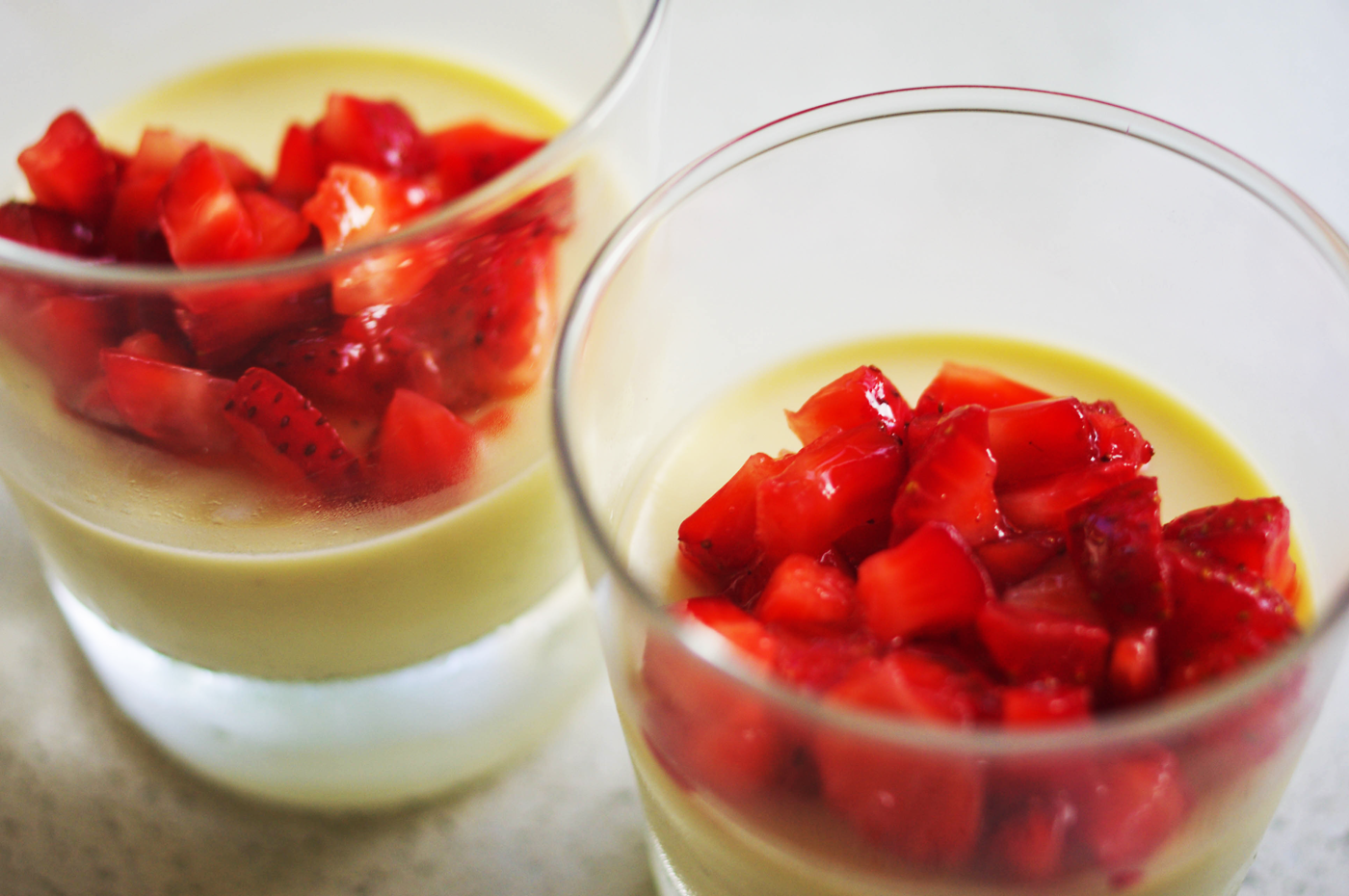 When it comes to anything food-related, simple truly is best. While I’m someone that often gets sucked in by the plethora of new restaurants and food trends out there, usually the average non-foodie just won’t get it, and only classic flavour combinations like strawberries and cream will do! I think that’s why I like making vanilla panna cotta so much, since it’s a definite crowd pleaser. Not to mention, it’s satisfying and stupidly simple to make! While the recipe adapted from David Lebovitz calls for vanilla, that’s probably changeable for experimentation. However, until I’m brave enough to try a new flavour combination I think I’ll be sticking with this recipe in its purest form. Read on if you’re interested in learning how to make it!

Method:
1. Heat the heavy cream and sugar in a saucepan or microwave. Once the sugar is dissolved, remove from heat and stir in the vanilla extract. (If using a vanilla bean, scrape the seeds from the bean into the cream and add the bean pod. Cover, and let infuse for 30 minutes. Remove the bean then rewarm the mixture before continuing.)
2. Lightly oil eight custard cups with a neutral-tasting oil.
3. Sprinkle the gelatin over the cold water in a medium-sized bowl and let stand 5 to 10 minutes.
4. Pour the warm panna cotta mixture over the gelatin and stir until the gelatin is completely dissolved.
5. Divide the panna cotta mixture into the prepared cups, then chill them for 2-4 hours or until firm. If you’re pressed for time, pour the panna cotta mixture into wine goblets so you can serve them in the glasses, without unmolding.
6. To make macerated strawberries, chop strawberries and place in a bowl. Sprinkle with 2 tablespoons of sugar, mix and let stand for 5-10 minutes.
7. Run a sharp knife around the edge of each panna cotta and unmold each onto a serving plate, and garnish as desired.

To make panna cotta with sheet gelatin: Soften 25g (approximately six sheets) in a litre of cold water for 5 to 10 minutes. Wring the sheets out and stir them into the warm panna cotta mixture in step 4, until dissolved.

As you can see, panna cotta on a plate definitely has a little more panache! Although the recipe calls for using a knife around the edges, I found that running the outside of the glass under hot water is a lot neater, allowing it to slip right out. Either way, the result is a ridiculously creamy dessert that’s bursting with vanilla goodness! Whilst you could also make strawberry coulis to accompany this, I find macerating strawberries a lot easier and necessary to cut through that creamy texture. Anyway, let me know if you happen to try this out, and have an awesome week!