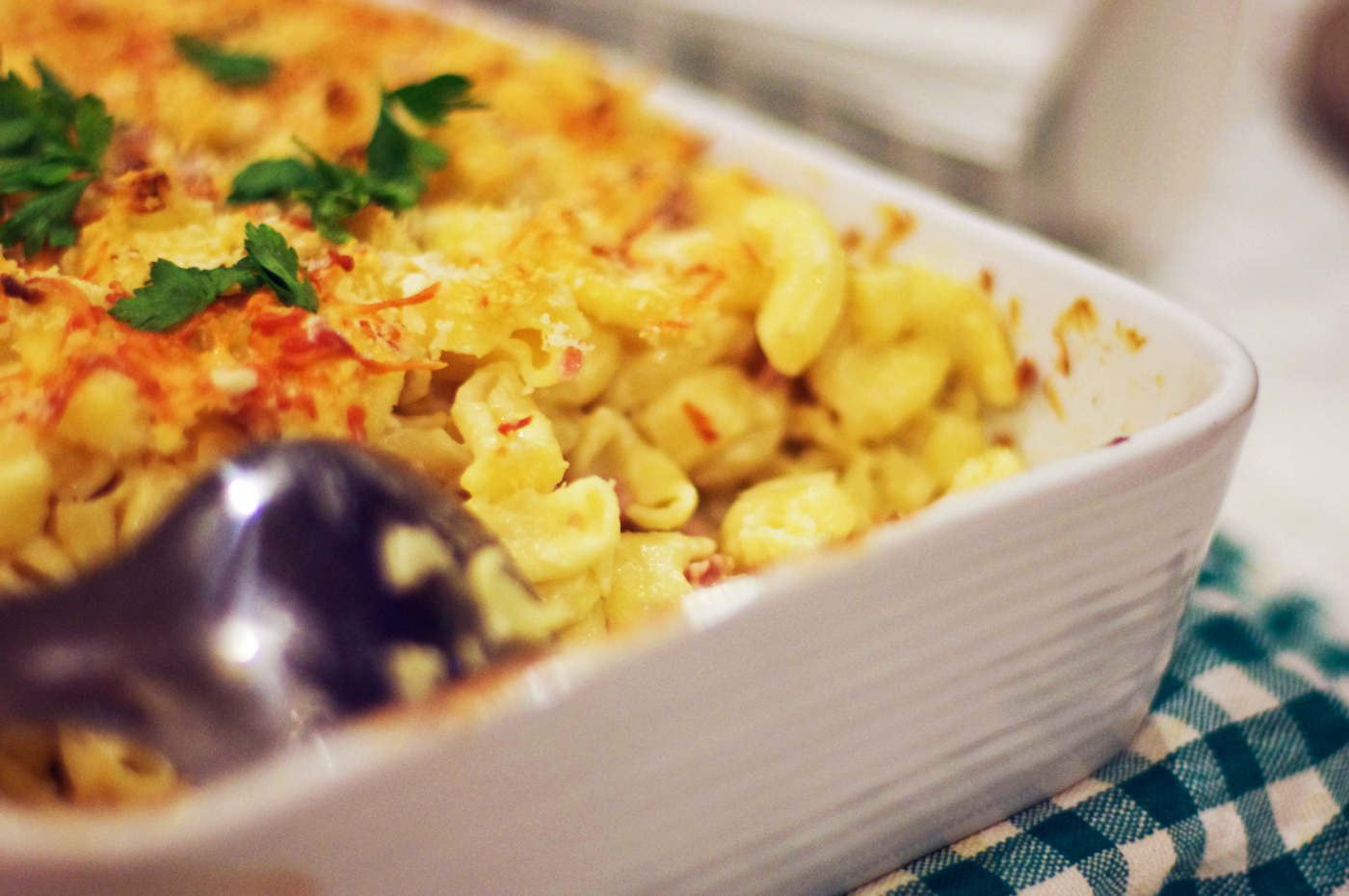 So while I’m not usually one to set far-fetched New Year resolutions, something that I definitely need to work on in 2014 is trying out more recipes. If my Pinterest is anything to go by I’m definitely not short on food inspiration, but I just never have the time or energy to try out new recipes! Anyway, the last time I had good old mac and cheese must have been years ago, but I’ve been dying to try a new version for the longest time. I think the crunchy breadcrumb topping on this rendition really makes it, so read on if you’re interested in the recipe!

Admittedly I was a bit nervous about making a white sauce for the first time, but it’s actually quite a simple process! If you need tips on how to make roux, this video from Food Wishes is a good starting point.

To be honest, I’m not usually a big recipe follower except when it comes to making things like desserts or baked goods. Usually when making ‘real’ food I tend to just play by ear and chuck a load of random things on a pan, and it’s not unusual that I’ll go completely off tangent from the original instructions! This case is no exception, but you can check out the original recipe for mac and cheese at Kate Gowing’s blog.

Ingredients:
500g macaroni or a similar pasta
250g smoked ham, diced
150g breadcrumbs (you can make your own or use panko like I did)
Chopped parsley to garnish
For the cheese sauce:
60g butter
60g plain flour
Pinch of ground nutmeg
2 tsp of mustard
750mL milk (or switch half with double cream for a more decadent mac and cheese)
250g tasty cheese
150g parmesan and extra

2. Bring a salted pan of water to the boil and add your pasta. Cook for 8-10 minutes or until you have your desired bite, but remember the pasta will cook more slightly in the oven.

3. For the sauce, begin by putting the flour, butter, nutmeg and mustard in a saucepan and cook on a low heat until the butter has fully melted.

4. Once this has melted, whisk in the milk bit by bit until you have a thick sauce. Remove from the heat and add the grated parmesan and tasty cheese to your taste, mixing until the cheese has melted. Season the sauce and add to the pasta with the ham, and stir in until fully combined.

5. Spread the pasta into a dish and sprinkle on the breadcrumbs and remaining cheese.

6. Bake in the centre of the oven for about 30 minutes or until the top is crispy and golden brown. Remove from oven and garnish with chopped parsley. Don’t be fooled, this recipe makes way more than enough for four people with leftovers to boot. Anyway, hopefully I don’t offend any mac and cheese purists out there but I think it’d taste amazing with extra vegetables like mushroom or broccoli thrown in next time! Let me know if you happen to try it out.