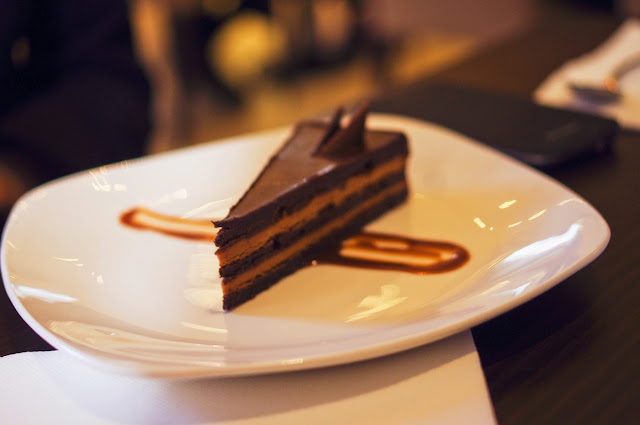 Celebration du Chocolat, assorted macarons, Lindt Pecan Brownie
If you’re anything like me and could count your camera as an extra body part, you’d probably know how easy it is to lose track of the photos you take. I have an embarrassingly large backlog of old pictures that I wasn’t feeling at the time, or simply left out since you can only squish so many photos into one post! Anyway, I’m not quite sure why I forgot about these pictures in the first place but they were taken on a sunny winter’s day spent catching up with high school friends. Considering I’d never visited Lindt Café before then I was a bit late on the bandwagon, but I anticipated a chocolate overload and the experience certainly didn’t disappoint!

After much deliberation I settled on the chocolate lava cake, and the memory of it alone is making my mouth water. To say that I’m obsessed with chocolate would be a complete understatement, so the warm and gooey cake insides were right up my alley! Although the lava cake itself was quite rich, I think the ice cream and complimentary dollop of clotted cream did well to cut through all that chocolatey goodness.

Cookies and cream ice cream with hot fudge, brownie sundae
If that shot of melted chocolate doesn’t excite you, I don’t know what would! Two of my companions went for the ice cream option, which almost made me tempted to try a scoop for myself. Although my friend said that her brownie sundae was sickly sweet, I think it seemed pretty impressive from appearances alone. True to its name, half of the glass seemed to be filled with pure brownie, which could either be a really good or bad thing depending on how bad your sweet tooth is.
Anyway, that’s about it for the things we tried! My only regret is that you can’t possibly sample everything in one go, unless you like the feeling of an inevitable sugar crash. That being said, I’ll probably be back soon to try out those iced chocolate drinks, or the waffles that I’ve heard so much about. Until then, hope you all have a great week!