If you ask me, you can either be a person that loves packing or despises it to the end of the earth. I find myself in the latter category, given that I rarely travel and haven’t picked up the tips and tricks that make the process a little easier! Anyway, next week I’m off to Melbourne for a few days but even the thought of packing for that overwhelms me, so I thought I’d take baby steps starting with my carry-on. The flight’s only 1.5 hours so obviously this stuff wouldn’t do on a long haul flight, but it also wouldn’t look out of place for what I’d want with me on long train rides home. Hover over to see the numbers! 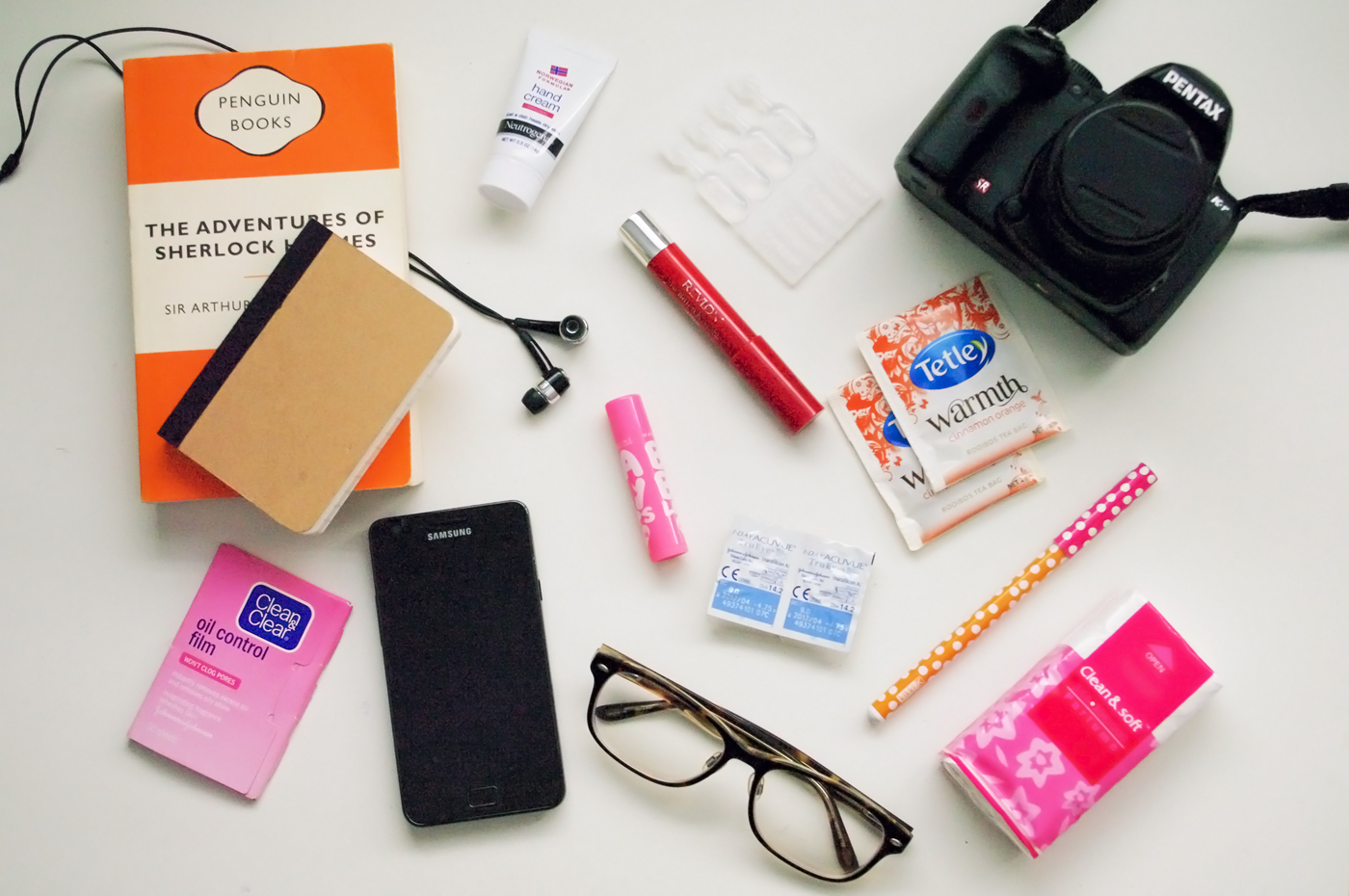 1. The Adventures of Sherlock Holmes – I can’t be the only one having Sherlock withdrawal symptoms, right? Anyway, Penguin Classics are typically light and relatively cheap reads, so I won’t be too sad if it happens to get lost or worn out from being knocked around my bag.

2. Notebook – If I need to write notes or have an epiphany on the road, putting pen to paper is the way to go!

3. Earphones – Whether it be on a flight or train, catching myself without headphones on public transport is the worst. I’m still on the lookout for a pretty but lightweight pair, but for now these Samsung ones tide me over just fine.

4. Neutrogena Norwegian Formula hand cream – I’ll admit it, I’m a hoarder when it comes to travel-sized things. For some reason using them daily feels wrong, so obviously I get excited when I get the chance to break out my collection! Anyway, I’ve been a bit obsessed with hand creams lately but should really refrain from buying more. The struggle is real…

5. Maybelline Baby Lips in Pink Lolita and Revlon Just Bitten Kissable balm stain in Romantic – I wasn’t kidding when I said that I needed to lay off the balm stains! I’m not even much of a red lip wearer, but the fact that this one can be built up makes it extremely versatile.

6. Systane Ultra eyedrops –  Planes and my perpetually dry eyes are never a good combination, so these are a no-brainer.

7. Pentax K-r – For those of you wondering what camera I use, this is it! I always use my 35mm f2.4 lens when travelling since it’s compact, performs decently in low light and has a good focal length.

8. Tetley Cinnamon Orange teabags –  Teabags might seem like a weird thing to travel with, but it’s always nice to have when the hotel’s tea just doesn’t cut it! Plus this brew’s delicious and feels like a giant hug, for lack of a better word.

9, 10. kikki.K pen and tissues– Trust me, when you’re travelling there’s always a time when someone needs a pen (same deal with tissues). Might as well be prepared and save yourself having to ask someone for them!

11, 12. Contacts and Osiris B21 glasses – On a long haul flight contacts are totally out of the question, especially if I plan on getting some shuteye! I think I’ll be fine this time around, but I find it’s always best to have my glasses on hand anyway.

13. Samsung SGS2 – I’m lacking an iPad or tablet, so my phone suffices as an entertainment device for now! I’ve mentioned the Pocket app before, but it’s seriously a lifesaver for storing the articles that I always procrastinate from reading.

14. Clean & Clear Oil Control Film – Does anyone else get a weird sense of satisfaction from using these? No? Well in any case, they’d be essential for what I hear is a heatwave in Melbourne right now. Summertime oiliness, I’m prepared for you.

I’m probably taking this Zara satchel that I bought on my trip to Melbourne last year, funnily enough! Admittedly I haven’t worn it much since my brown tote came into the mix, but the shoulder strap is good for some handsfree action (especially when shopping). Anyway, there are probably a gazillion things I’ve forgotten to include here considering my tendency to overpack at the last minute, but at least it’s a start. What are your travel or flight essentials? Enlighten me!

walk in the park