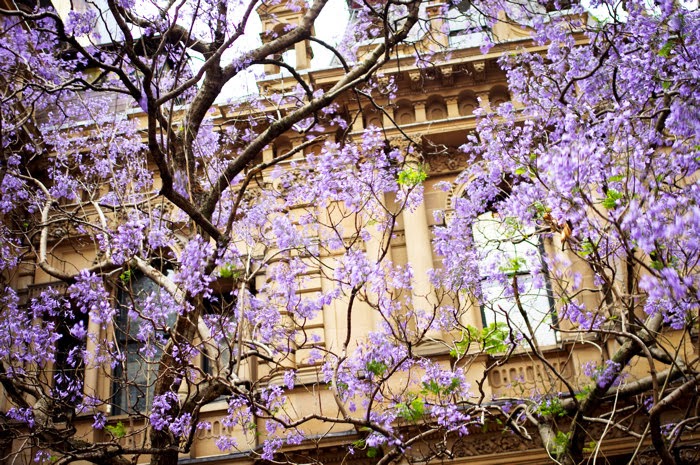 So guess who’s back? After over a month of inactivity on this blog, I have finally finished my HSC exams as of yesterday! And what better way to celebrate than to do my favourite thing… yep, while I’m sure some people will be partying hard right now I celebrate by eating. In recent weeks I’ve refrained from going anywhere out of guilt, so I’m really happy that I don’t have to do that anymore. Anyway, yesterday my Japanese class (minus one) went wandering around the city and ate at Wagaya. By the way I saw these pretty flowers at the church in Sydney CBD, and I’m quite sure they weren’t there when I last walked by… I guess it really has been ages since I’d last been to the city!

So much food, so much happiness… with the number of posts I dedicate to eating out it seems like this is on the verge of becoming a food blog. However, my judgement of taste is usually limited to either good or bad, so I guess I’d make a mediocre food critic. That being said, I do think that the karaage chicken was amazing, one the best I’ve had! At other places the meat tends to be too dry, but these were so crunchy on the outside and succulent and juicy on the inside. If we weren’t sharing I swear I could’ve eaten the whole thing…

I didn’t have any of the desserts on the right, but instead opted for the green tea latte. SO GOOD. Awhile back I tried the one from Mizuya with red beans, but I only thought it was so-so. I think the ice cream really made this latte, plus it helped counteract the bitterness. Now I’m dying to know where the ice cream was from because I’m still dreaming about it, it was that delicious and creamy… sadly for me though, I’d have to go out of my way to buy tubs of green tea ice cream in Sydney (unless someone happens to know where to get them from?).

I don’t know why but I liked this photo, even if it turned out kind of blurry. Anyway, I’ll be posting again in the near future! It still hasn’t hit me that I basically have no obligations for the next four months. It’s also kind of weird that it’s a Wednesday morning and I have nowhere to be… well then, bye for now and I hope you’re having a good week wherever you are!